xSellize repo is definitely an essential Cydia source among all the top Cydia sources. It is one of the best Cydia sources for iOS 7 users especially to those who want to play emulator games on their iOS devices, for example, Nintendo, Gamecube, Gameboy, Sega Genesis, and other games available in the ‘80s and ‘90s. In addition to that, xSellize repo also hosts a lot of cracked apps, mods, and tweaks with the purpose to allow iOS users to try an app before buying it from App Store. Popular Cydia apps available in this repo are AdBlock, Springtomize 2, iBlacklist, AppSync, Safari Upload Enabler, and many more.

xSellize is a well-known Cydia repo and it has been around the jailbreak community for quite some time. It works very well on iOS 4, iOS 5, iOS 6, and iOS 7 without any problem. On top of that, the developer team is now working to bring this wonderful Cydia repo to iOS 8. For those who have been hunting how to install xSellize repo from Cydia, you may follow the step by step guide to do it. It takes less than 5 minutes to add xSellize repo to your jailbroken iPhone, iPad, or iPod Touch.

How to Add xSellize Repo

It is crucial to understand that xSellize only works on jailbreak iOS device. You have to jailbreak and download Cydia to your iOS device before you are able to use xSellize to download cracked apps. When you have a jailbroken iOS device with Cydia installed, you are ready to go.

Step 2: Tap on Edit and then tap on the Add button located on top left as shown in the image here. You will see a pop up message box asking you to enter the “Cydia/APT URL”. This is where you need to enter the URL of the Cydia repo you want to add. 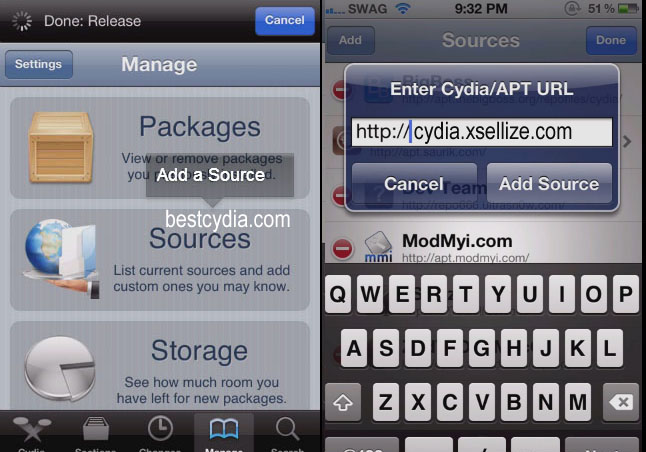 Step 3: There are more than one Cydia sources for xSellize and here are the two most commonly used – http://cydia.xsellize.com and http://xsellize.com. Both of them work well on iPhone 6, iPhone 5, iPhone 4/4S, iPad, Mini iPad, and iPod Touch. You may also try some other sources if the given xSellize repo is not working for you. “Size Mismatch” is one very common problem.

Step 4: Now you should be able to see xSellize repo is added to your Cydia. Tap on it and use the search bar to search for iAP Cracker if you want to download cracked apps. iAP Cracker is an app that brings paid apps for free for you. Return to your home screen once the installation is completed. xSellize icon should be there now.

Please share your problem here if the installation steps given above are not working for you. Otherwise, you might want to check out the best Cydia tweaks for iOS 7 and use xSellize to download all of them. On the other hand, please share this article to your social networking sites such as Facebook, Twitter, Pinterest, or others if this article is helpful.