iOS 9 jailbreak is already available and you can install free apps and tweaks from Cydia App store. It’s without doubt jailbreak allows you to get the maximum cracked apps and games you want. However, there are a few ways to install iOS 9 cracked apps without jailbreak. These methods are free and they are great for iOS 9 users who do not want to void the warranty of their iPhone, iPad, and iPod Touch. Check out what they are and how they work on iOS 9, 9.0.1, 9.0.2, 9.1 and 9.2 if you would like to test some paid apps before buying them.

So far, vShare is the most wanted app to look for iOS 9 cracked apps. The community behind vShare is very huge and there are many new apps and games uploaded to the server almost every day. vShare works on iPhone, iPad and iPod Touch without jailbreak. With no jailbreak, you can still enjoy many free apps, themes, ringtone, wallpapers and games. Additionally, you can also install Movie Box iOS 9 via vShare. If you would like to try vShare with jailbreak, you can follow this step-by-step guide to install vShare after the jailbreak.

Just like vShare, Kuaiyong lets you install iOS 9 cracked apps and cracked games without jailbreak. This program is written in Chinese language but you can download Kuaiyong English version which has been translated from the original version. Download the screenshot from our website and it will be very useful for you.

The newest version of iFunbox works on both Mac and Windows. By installing iFunbox to your computer, you can download the IPA file of your desired apps or games. You can then use the control panel in iFunbox to transfer the iPA file to your iPhone, iPad or iPod Touch. The number of free apps available in iFunbox is huge, making it one of the best apps to install cracked apps without jailbreak.

AppCake has been in the jailbreak world for a few years. Some iOS users voted it as the best app for cracked apps because it hosts many high quality apps and games. The latest paid apps in App Store can often be found via AppCake. This is one reason why AppCake is always considered as the best Installous alternatives.

AppAddict iOS 9 can be installed from iFunbox. It is free to be used without jailbreak. It provides tons of iOS 9 apps, iOS 8 apps as well as OS X apps for free. In addition, you can also download free e-books from AppAddict. For those who already jailbreak iOS 9 with Pangu, you can install AppAddict iOS 9 from AppAddict repo effortlessly.

Other than the above-mentioned apps, you can also try Apptrackr alternatives such as Zeusmos, HipStore, Pandaapp or OpenAppMkt. They work well on iOS 9 but the number of apps is not a lot compared to vShare, Kuaiyong, iFunbox, AppCake and AppAddict. 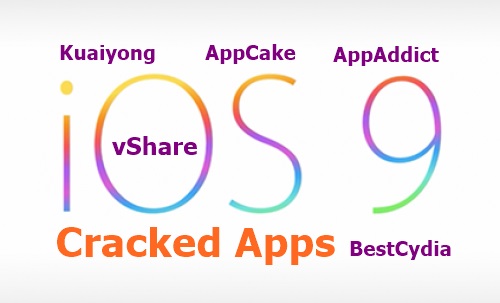